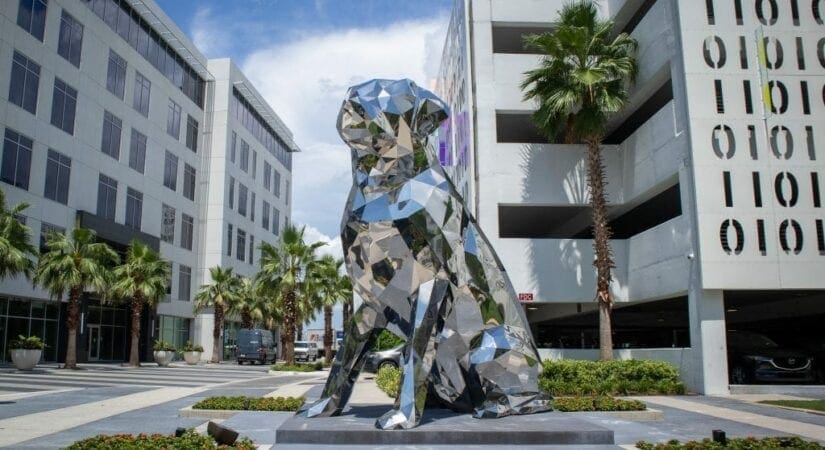 The land that is Orange County was part of the first land to come up from below the Early Oligocene sea 33.9–28.4 million years ago and is known as Orange Island. Orange County’s Rock Spring location is a Pleistocene fossil-bearing area and has yielded a vast variety of birds and mammals including giant sloth, mammoth, camel, and the dire wolf dating around 1.1 million years ago.[4]

Immediately following the transfer of Florida to the United States in 1821, Governor Andrew Jackson created two counties: Escambia to the west of the Suwannee River and St. Johns to the east.[5] In 1824, the area to the south of St. Johns County was organized as Mosquito County, and Enterprise was named its county seat. This large county took up much of central Florida. It was renamed as Orange County in 1845 when Florida became a state.[6] After population increased in the region, the legislature organized several counties, such as Osceola, Seminole, Lake, and Volusia, from its territory.

During the post-Reconstruction period, whites committed a high rate of racial violence against blacks in Orange County; they exercised terrorism to re-establish and maintain white supremacy. Whites lynched 33 African Americans here from 1877 to 1950; most were killed in the decades around the turn of the 20th century. This was the highest total of any county in the state, and sixth highest of any county in the country.[7] Florida had the highest per capita rate of lynchings of any state in the South, where the great majority of these extrajudicial murders took place.[8]

Among the terrorist lynchings was the death of Julius “July” Perry of Ocoee, whose body was found November 3, 1920, hanged from a lightpole in Orlando, near the house of a judge known to be sympathetic to black voting.[7] But this was part of a much larger story of KKK and other white attempts to suppress black voting in Ocoee and the state. African Americans had organized for a year to increase voter turnout for the 1920 presidential election, with organizations helping prepare residents for voter registration, paying for poll taxes, and similar actions. On Election Day in Ocoee, blacks were turned away from the polls. Perry, a prosperous farmer, was suspected of sheltering Mose Norman, an African-American man who had tried to vote.[9] After Norman was twice turned away, white violence broke out, resulting in a riot through the black community, leaving an estimated 50 to 60 blacks dead and all the properties destroyed. Many blacks fled from Ocoee to save their lives, and the town became all-white.[9][7] Voting efforts were suppressed for decades.

Orange County was renamed from Mosquito County for the fruit that constituted the county’s main commodity crop. At its peak in the early 1970s, some 80,000 acres (320 km2) were planted in citrus in Orange County.[citation needed] The dark-green foliage of orange trees filled the county, as did the scent of the orange blossoms when in bloom. Fewer commercial orange groves remained by the end of the twentieth century. The majority of groves were destroyed by the freezing temperatures that occurred in the successive winters of 1985–1986, in particular by the January 1985 cold wave, the worst since 1899.[citation needed]

The financial setbacks, not the first in the grove region’s history, were too challenging for many growers. Economically destroyed, many walked away from the land. Others awaited other opportunities. One of the region’s major land owners and growers was the Tropicana company. They withdrew rather than try to come back from these seemingly endless generational decimation. With no realistic avenues for agricultural use of this rural land, and Florida’s continuing strong population growth and its attendant needs (aided and supported by the success of nearby Walt Disney World and Universal Studios Florida), these areas began to be developed for housing. However, several packing facilities and wholesalers are still in Orange County.

You are here Orange County, Florida